I’m a word guy, but whenever I see something that evokes the absurd, I pull out my camera. Phone. Or whatever it is. When enough of them back up, it’s time to dump them on my unsuspecting readers. Consider them all to be writing prompts. There’s bound to be a story behind each one.

This week, here are some photos that capture certain facets of the weird world we live in.

This art exhibit gives the attendee the full “class distinction” immersion experience. (Note: This photo is actually from my daughter who also has a keen eye for the bizarre.)

3rd Ave at Second Ave?!? Is this a math or geography fail? Either way, some mail’s gonna get lost. 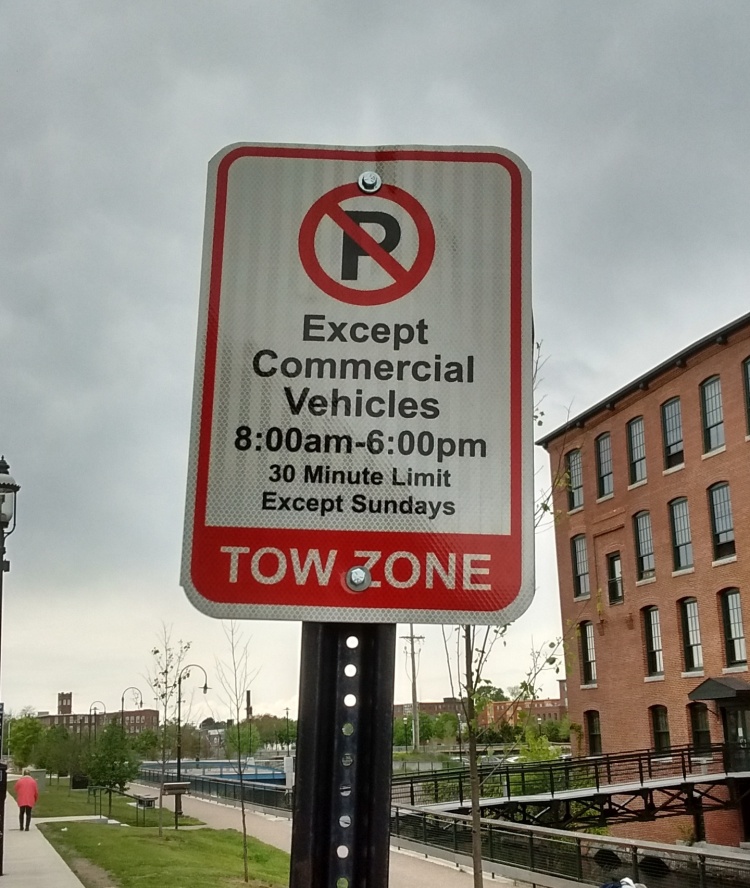 For the life of me, I can’t figure out who can park here when. There are too many clauses. If you can parse this for me, I’d be forever in your debt. Meanwhile I’ll play it safe and park on the other side of the street. 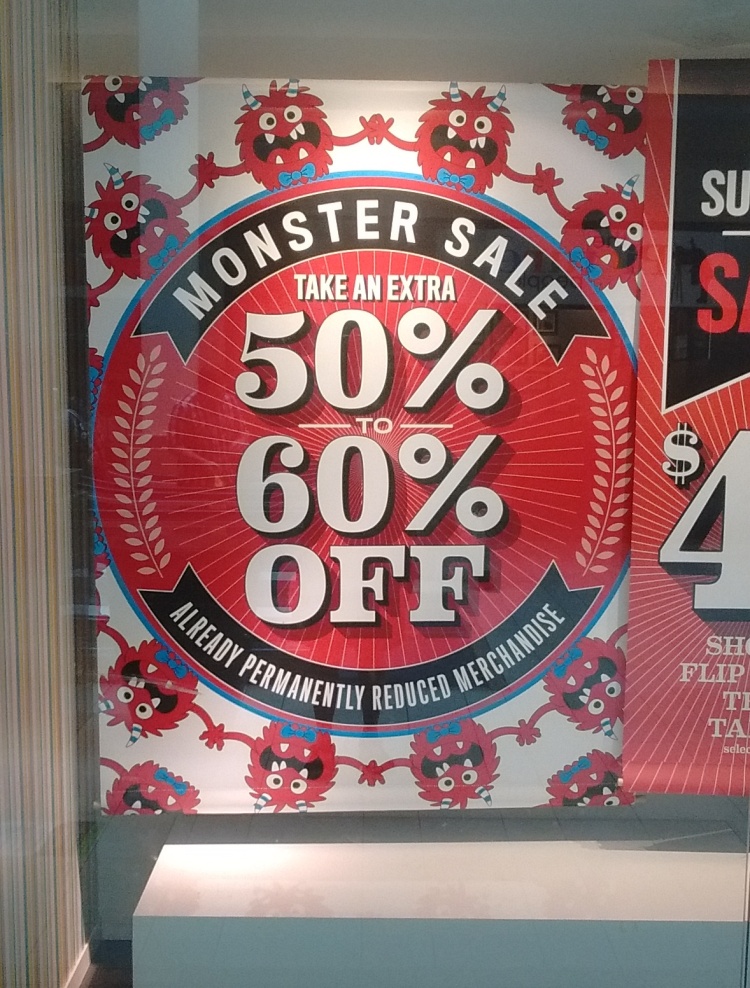 It’s bad enough that there’s a store selling monsters at a discount, but look who’s selling them…

…a store for kids! We all thought the movie “Monsters, Inc.” explained where the monsters under the bed came from. Now we know different.

Finally! A store that’s selling something we can all really use. Check out the circled sign, lost in a jumble of useless shops.

Sign at a local take-out shop. Risking their own business to do their part to restore some semblance of civility to our technology-obsessed culture.

Power drinks. Neither food nor nourishment, yet they’re in a cooler with that label. Go figure. What else can we expect in a nation where ketchup has been declared a vegetable?

Believe it or not, this photo was taken in the cradle of American liberty, the birthplace of the American Revolution: Concord (MA) green. Yet they’re using the British term for the traffic circle! It’s a rotary, people! A rotary. Lorries don’t go around it, TRUCKS do! Next thing you know, we’ll be driving on the wrong side of the road! Stop the madness! Is this what we fought the revolution for? I say NO! Then again, who cares.

Hello, I’m Bill Gates. It’s late in the game but nevertheless I’ve decided to “throw my hat into the ring” for the 2016 presidential election. How, you may ask, do I have the temerity to pursue such a goal when I haven’t the slightest experience whatsoever in the fields of politics or statesmanship or public service or governance?

Where have you been for the past year?

It’s been demonstrated that any idiot can achieve the highest office in the nation if he can scrape together a few bucks. I’ve got a lot more than a few bucks.

Hell, if that weasel Donald Trump can run, why can’t I? After all, he’s running on nothing beyond his ability to make money. He’s worth a measly four and a half billion and I’m worth 76 billion.

For people who equate intelligence with net worth, that makes me a mega-genius and Mr. Schlump a moron. How appropriate.

I eat impoverished punks like Trump for breakfast and fart them out at lunch. There are 120 people in this country worth more than him, people like Rupert Murdoch, Ralph Lauren and every Tom-Dick-and-Mary in the Walton family. Maybe I’ll put them all in my cabinet. George Lucas (also richer) can run NASA. (Anything to keep him from making more movies.)

That bozo Trump doesn’t know jack about making real money and he wants to run the country? He started out with the fortune daddy-kins gave him and he  managed to make a slightly bigger fortune. Big friggin’ deal. You can do that by putting the money in a savings account. Oh yeah, Trump only had to declare bankruptcy FOUR TIMES on the way to accumulating his pittance.

And the guy calls himself a winner? I think wiener is more like it. What has he won? A handful of Republican primaries over a splintered field of posers and almost never getting a majority until everyone else quit? How’s about Robert Kraft? Four time Super Bowl champ! And richer than loser Schlump! Kraft can be my Surgeon General. He can put warning labels on football helmets.

To sweeten the pot, I’m picking Warren Buffet as Vice President. Between us, we’re worth more than 30 times what Trump is. If a measly 4.5 billion qualifies someone to run for president, we should be emperors of the solar system.

But we’ll settle for making Trump look like the paltry jackass he is.