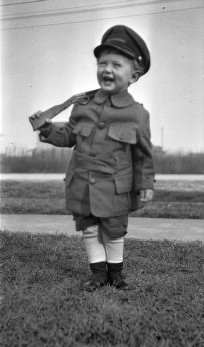 It’s been accurately observed that toy guns are more rigorously regulated than the real thing. I for one think this is an abomination for our country. It’s time to end the madness.

That’s why I’m announcing the creation of the NTRA: the National Toy Rifle Association to send the message to the Buster-Brown-booted thugs:

Keep your hands off my toy guns!

Adults aren’t the only ones protected by the 2nd amendment. The right to arm toddlers shall not be infringed.

Just because some wimpy, timid housewife told her little boy, “You’ll shoot your eye out”, are we going to live in fear? No! If she’d listened to little Ralphie, her home wouldn’t have been overrun by Black Bart and his gang, known communist sympathizers.

If we give up our toy guns, the terrorists win. Who’s going to defend America then? No matter that a paintball or cap gun won’t do much to protect us from missiles and nuclear devices. This is a matter of principle!

It’s time to say “enough is enough”. For those of us who can stand up, it’s time to stand up for our rights. The rest of us will just sit and fuss.

You can have my toy gun when you pry it from my stinky, poopy diaper.

Check out the first line of this sign. It’s supposed to be a pun on the fact that the restaurant in question will tow a drunk patron’s car home. I applaud the intent but question the implementation.

If I’m too drunk to drive (which would be a major miracle since I don’t drink alcohol at all) what are the odds I’ll understand this message, much less appreciate the attempt at humor?

In fact, when I saw it, I started to question my own sobriety. Were my eyes playing tricks on me? Why does it say “Tow Drunk”? Did they think “Two” was the right word and transposed a couple of letters?

It boggled my mind so much that I was forced to publish this lame post in an effort to avoid being overcome altogether.

In which case, I’d probably need to be tooed.

(Sorry. I’m in the midst of a family crisis while also readying a book for publishing. Thus, the blog loses. This, such as it is, is the best I can deliver today.)

No time this week to devote to a fully developed article.

This excuse might wear on some nerves – I’ve used it more than my share of times – but it can’t be helped. If you knew my situation, I’m certain you would agree. Nevertheless, I’ve made a pact with myself and my readers to put something out here every other week (and on LITL on the in-between weeks). Rather than shortchange you, I’m publishing a longer one than usual… if you buy into the maxim that a picture is worth a thousand words.

For reasons I won’t get into, I’ve spent a lot of time in hospitals lately. Based on the way people park in those places, you’d think they were hospitals for antisocial morons. This is just a small sample. There were many, many more examples. A hospital? Come on, folks! As tempting as it is, I would never key a car. But it’s hard to suppress the hope that someone will.

This is my new hero, unicycling the San Marcos Pass in Santa Barbara, CA.

I went inside, but there was nothing apply in there – no apply pie, no turnovers, nothing. Oh, the scourge of ambiguity!

Finally, the power of cattle leg oil in a shampoo. What a great country we live in!