[The point here is to write a story about something that happened to me a very long time ago. I started it last week not knowing where it would go or how long it would take to get there. Let’s all find out together, shall we?]

While living in the limbo of preadolescence, all things appear alien to a boy. To this boy they did, anyway. At the same time, the world of fantasy becomes increasingly attractive since the one he’s living in grows increasingly hostile. The sense of estrangement from all things familiar is thoroughly disorienting. Nighttime only intensifies the resulting wonder and fear.

Today, waking up from a deep sleep is a nightly occurrence. At least. In those early days, sleep was a jailer to whom I was willingly incarcerated. A raucous day in the Florida sunshine made sleep that much heavier. How to explain, then, awakening to nothing in the blackness of the night? Perhaps I’d consumed too much Coke or lemonade to relieve the oppressive Florida heat and humidity. The pressure on my bladder attested to that possibility.

In the surrounding darkness and unfamiliar environs, inertia and fear battled nature’s urges. For a few moments, I was able to hold back the dam and, there being nothing to see, I listened to the sounds of night in the swampy neighborhood.

In complete darkness and with no one stirring in my aunt’s house, I was surprised to hear, not silence, but a near deafening din. All manner of creature filled the sonic vacuum left by sleeping humans: frogs, insects, wild and domestic beasts. Low murmurs, high-pitched screeches, and everything in between created a symphony of the unknown to my immature ears and overdeveloped imagination.

I was in no hurry to leave the safe confines of the bed, but my bladder had other ideas.

With stealth befitting a more perilous predicament, I slipped out of the room and along the length (maybe seven feet) of hallway to the only bathroom in the cramped ranch house. What’s the first thing to do when one finds oneself in a dark bathroom, preparing to do one’s business? Turn on the light, of course.

Imagine yourself under a spotlight on a stage in a coal-black hall with innumerable… somethings you can’t see watching you. That was me. The world was black and I was immersed in glaring brightness to which my eyes had yet to acclimate. I’ve never, before or since, felt so vulnerable. I was in a cube of light in a world of dark. The single window in the bathroom shone like a beacon out to the unknown outside.

It was unnerving to a boy who had no idea what it meant to be unnerved. My consuming thought was to finish what I went in there for and get out as soon as possible. My fear, unfortunately, inhibited the process, forcing me to stand exposed. The task took far longer than it normally would but I finally finished.

It was at that precise moment that I heard the first of the footsteps. From outside.

Sir Alfred Hitchcock was credited with saying, “Drama is life with the dull bits cut out.”* Hard to argue with that, especially since its source is arguably the least boring filmmaker of them all. Still, I’ve always wondered what happened to those “dull bits.”

This week, I think I found out. 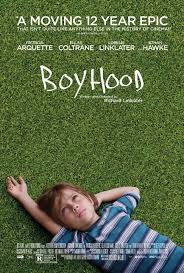 This post could get me into trouble, but I have to get this thought out of my neurons. The Academy Award nominated Best Picture, “Boyhood”, while a laudable piece of logistics, makes for agonizingly boring viewing. You’d think you could find 2¾ hours of material in a 12-year span of a kid’s life that would be gripping enough to keep my attention.

You’d be wrong. Thank goodness for the fast forward button.

There’s a certain hubris required to make a movie that’s almost three hours long. Some directors have (or had) it and pulled it off: Kubrick and Peter Jackson, to name a couple who succeeded. The former because of his genius, the latter because of his rich source material, courtesy of Tolkien who supplied the genius in that case.

Others are less successful. I’ve already noted Mr. Nolan in these virtual pages. I think I can now safely add Mr. Linklater. Both are obviously gifted filmmakers. They’ve proved as much in previous films.

I’m not suggesting that “Boyhood” is a bad film. Who the heck am I to make such a presumptuous claim? I’m just saying it’s dull as dirt. It makes me wonder, who was this movie made for, the creator or the viewer?

The concept is undoubtedly exceptional. Much of the obviously improvised dialog is engaging. But it’s the “dull bits” of life. There’s nothing really new being said. The film’s notoriety seems to be riding on a single gimmick, albeit a brilliant gimmick. If this film had been shot all at the same time with different actors playing the aging youthful roles (the only ones that show marked change), would it have received the acclaim it has? I’m guessing no. It would be just another tired coming-of-age story.

There’s another, less well-known film that deserves similar praise for its use of an even more innovative device. “Russian Ark” is a 99-minute movie that was made in one continuous shot. That’s right, no “cut”, no edits, no stopping the camera at all. It’s ingenious, inventive, amazing. It’s also excruciatingly tedious to view. The Mona Lisa is fantastic, but I don’t want to stare at it for 99 minutes, never mind 165.

I’ve seen longer and slower movies that didn’t bore me. The aforementioned Mr. Kubrick’s “2001: A Space Odyssey” is the classic example. (That’s why a clever Mad magazine spoof of it was called “201 Minutes of Space Idiocy”.) It’s long and it’s slow, yet I’m entranced by its entirety.

I adore movies that take time to tell their stories. If that story is compelling, if the characters are engaging, they can take all the time they want.

These are all among my favorite films. They all unfold at a leisurely – some might say plodding – pace but never bore me for a second. Why? Maybe it’s just me.

“Boyhood” feels a lot like life – an admirable accomplishment – but hardly groundbreaking. Every good movie should feel like life in some way or another. The problem is, if I want to view life as it presents itself, I don’t have to go to the theater or watch TV.

It’s happening all around me, with far more interesting people than populate “Boyhood”.

*The great auteur also made the observation that, “The length of a film should be directly related to the endurance of the human bladder.” A lot depends on the bladder of the viewer. In my case, “Boyhood” failed that test as well.