Depression is rampant in our culture. Growing up, all I knew about depression was the unemployment and soup lines. It was something my teachers and older people talked about. Now it seems everyone is depressed. If you aren’t downing Prozac, Lexapro, or Zoloft by the fistful, you aren’t trending.

Depression is real. I don’t want to diminish that fact. It’s a serious medical condition that can be fatal. Medication is often a valuable tool to combat its ravages. That being said, I’m of the opinion that there are non-pharmaceutical approaches that could either lessen its effects or – who knows? – relieve it completely for some milder cases. The prescription I’m suggesting here is – excuse the esoteric medical jargon: avoiding depressing stuff. (Note: I’m not saying this as a cure, but why feed the flame?)

This weekend I watched an incredibly depressing movie. Worse, it was a depressing mini-series. Four hours of non-stop misery. Eventually I had to minimize the pain by fast-forwarding through some of it. If I’d watched it to the end (at normal speed) I couldn’t be held responsible for my actions. And if I were already depressed? I just thank God I wasn’t.

Why are so many movies depressing? Look at the Oscar nominees: Birdman, Whiplash, American Sniper, and Boyhood are a sad group. Don’t subject yourself to any of them if you’re trying to keep your mood upbeat. The others are either less so or I just don’t know enough about them to judge. They could be wallowing in the slough of despond with Foxcatcher, Still Alice, Gone Girl, and the rest of that lot for all I know.

Not a “Sound of Music” in the bunch.

I’m not saying we should have a non-stop parade of “happy, happy, joy, joy” fluff, but couldn’t we at least have one every now and then? Is life so joyful that we are well-advised to dampen everyone’s moods lest they overdose on excess happiness and levity?

Let me suggest that it’s the other way around. Life is so depressing for so many that, instead of feeding that, we should consider ways to counteract it. Making more positive movies is one possibility. I’m no lone curmudgeon in this opinion. A couple of years ago I heard a talk by film producer Lindsay Doran (Sense and Sensibility, Stranger than Fiction) in which she mentioned this issue. This NY Times article gives an overview of her talk. (It’s worth a read for this and her other fascinating insights.)

I’m not talking about “happy endings” in the classic fairy tale sense. Just lighten up a bit now and then, please. There’s a place for dark films. One of my favorite films of all time is also one of the darkest: “The Conversation” is a brilliant piece of paranoid pleasure. On the opposite end of the bleakness spectrum is another of my favorites: “The Princess Bride”. It actually has a fairy tale ending. You won’t find many movies as different as those two, connected only by their genius.

It’s not just about the number of dark, hopeless, depressing movies there are. With so many Oscar nominees falling into that category it gives the impression that a positive movie can’t be good. Joy can’t be taken seriously. When is the last time a performer in a comedy won an acting prize? Is comic acting really so effortless that it can be dismissed? The award mavens would have you think so. (Personal note: It ain’t.)

This, of course, reinforces the problem. People want to make movies that others take seriously, which means they must make serious and, if possible, morbid movies.

Look at the top grossing movies for 2014 and you’ll see a different picture. For the most part, people are paying to see more positive movies. If dollars drive the movie industry, how to explain this gap?

Just don’t expect to get them too often at the movies.

I’ve been told by more than one person that I have a song for everything. That is, for almost any situation, I can recall some obscure song lyric that captures that situation’s essence, or enhances the experience thereof. There’s probably at least one song that applies to any occasion. I just seem to know more than my fair share. 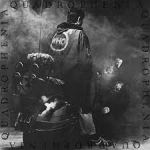 Thus, when I was thinking about a title for this post, it shouldn’t surprise you that I settled on song lyrics. In fact, the lyrics of two songs from “Quadrophenia“, the classic album by The Who, came to mind. In two different songs from that outstanding concept album, there are lines that ask, “Why should I care?”

I’ve been asking myself that question lately regarding my reaction to fictional characters. As I alluded to in my previous post about “Peace Like a River”, some books have characters that are so real, so sympathetic, so readily identifiable, I simply buy into them as real people and I care about what happens to them. Further, I want to know what happens to them once the story (movie, book, play, short story, whatever) ends.

A collection of flat, one-dimensional characters have no place to go and no reason to go there. They have no motivation, no purpose for being. Who cares what they do? They’re deadly dull. They are dead. Who wants to read or write about them?

We could learn a lot by thinking about ourselves in those terms. If we have no depth, no purpose, no absolute motivator, we’re going to lead a pretty dull existence, more than likely swamped by our own self-interest.

Recently, someone who performed a test-read of my first (and, so far, only) novel said she couldn’t stop thinking about the protagonist, a young woman in Haiti. That’s about as high praise as I could want and more than I expect, yet I feel the same way about her and the rest of the characters.

Having rewritten the book in part or whole several times, I’ve probably read it a dozen or more times. Maybe it’s my familiarity with the characters, but I’ve come to (in some weird way) love and care for them. I’m so pathetic in fact, that I cry every time I read certain poignant passages.

It happens all over the place with me. In movies, for example:

And those are just movies. What of books like “The Rosie Project”, “Winter’s Tale”, “Gilead”, “Claire of the Sea Light”, and, of course, “Peace Like a River”?

(This phenomenon appears to be a “chick thing”. If you Google “fictional characters”, you’ll see what I mean. I’ll have to live with that, I guess.)

This is why I love movies with “follow-up” info before the credits roll. I get to find out what happened to all those fascinating players in “Remember the Titans”. Those are real human beings, so there’s some excuse for me in that case.

Strangely, it doesn’t matter if the characters are the creation of some writer’s imagination. I still wanna know what happens to them. That’s why I’m relieved to see where the lives of the members of The Wonders (not the One-ders) lead them in Tom Hanks’ vastly under-appreciated “That Thing You Do”.

That extra information can make a funny movie even funnier and more memorable. The roller coaster relationship of Robert and Mary is just as nuts after the movie ends in Albert Brooks’s hysterical “Modern Romance”, another hidden gem and one of the funniest movies I’ve ever seen.

I really care about these quasi-people. I just don’t know why.

Maybe I should stick with non-fiction.