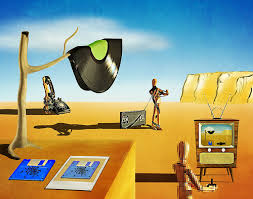 No one needs to be reminded of the transitory nature of this life. Today is a memory before we have a chance to make sense of it. Those times we breathlessly look forward to become vague memories while they are still echoing in our minds.

I’ve written on this topic before, which gives you some idea of how close to my heart it is. The speed at which the highly anticipated future becomes the distant path can be downright frightening. How desperately we want to hold onto those moments in a more tangible form than an elusive and fleeting memory.

Even the title of this blog, “Scribbling in the Sand” speaks to the futility of trying to extend ourselves beyond ourselves. Those scribbles are washed away with the next tide, in whatever form its breakers take.

Look no further than the mundane articles of our daily lives to demonstrate this concept in the most concrete manner possible. Every day, some of our most wonderful innovations are relegated to the scrap heap of history (which is shipped to China to be recycled into future scrap heap candidates).

Here is just a tiny percentage of those once-precious items that have disappeared in my years:

No small amount of technology has come and gone over the same period: acoustic modems (I’m old enough to remember when 9600 baud was screamin’ fast), 8-tracks, cassettes, and videotapes all had their brief flicker of utility. In fact, all “tape” is gone – except that of the duct, masking, and Scotch varieties – but the name lives on as we talk about taping TV shows, with no tape is involved.

A few things out there are barely hanging on or have been relegated to the role of novelty. Vinyl records refuse to give up, but they’re only a niche. Virtually all media except various forms of computer memory (increasingly of the solid-state species, though all bets are off if “the cloud” has its way) have no real raison d’etre anymore.

The same can be said of watches, books, newspapers, and writing in cursive. A day may come when the only people who see such relics do so as they scratch their heads walking by museum exhibits.

Although most of them have become land for low income housing, strip malls, and office parks, here’s hoping that a remnant of drive-ins survive into the future. They’d be missed at least as much as any extinct species.

In the “we hardly knew ye” category, you’ll find flash-in-the-pan technologies such as laser discs, Betamax, HD-DVD, and PDA’s.

It’s hard to say goodbye to some things. The GPS, itself now a dispensable technology in its standalone form, eliminated the need to give directions. I say “need” not so much for the recipient of those directions as for the giver. We all know folks who live to provide detailed directions of the best possible route(s) to our destination. When I recognize that craving, I generally allow the speaker the opportunity to give vent to his passion. Then I return to Google Maps or a GPS and find the best route for myself. No endless discussion of the best shortcut, most scenic route, or least traffic.

While I don’t miss LP’s so much, I do mourn the loss of album packaging. Some of that album art was suitable for mounting and hanging on your wall. (I have just two words for you: Roger Dean.) A few releases contained enough junk to overflow a fan’s scrapbook, e.g. The Who, “Live at Leeds” or “Chicago at Carnegie Hall”. Sure they were extravagant and pompous, but so was the music and we loved it.

CD’s never offered such wit and variety. And downloads? Fuhgeddaboudit.

I don’t wish to live in the past, but it would be nice if some of the past still lived here.

[By the way, if you’re paying attention, you’ll notice that the smartphone (beginning with the iPhone) is the perpetrator of many in these untimely demises. Not that it’s wrong, just saying is all.]