Purely out of an overdeveloped sense of obligation and closure, I recently watched the final episode of “The Hobbit” trilogy, which I believe was subtitled, “The Last in an Endless Series of Epic Battles and Beheadings Filmed in a Cynical Attempt to Extract Maximum Funds from an Unsuspecting Public by Bloating a Single Book into Three Movies”. If it sounds as if I resented forking over my cash to see the last of these artificially over-inflated flicks, you’d be on the money – my money. I guess that makes me a willing participant in my own mugging.

Let it be known, I’m a huge fan of Peter Jackson’s original “Lord of the Rings” trilogy. Three books, three movies. That makes perfect sense. Trying to cram those three literary masterpieces into a single (watchable in one sitting) film would have been as foolhardy as turning the single Hobbit book into three films was rapacious. Nor am I averse to watching the admittedly protracted extended version, which clocks in at over 11 hours.

It ain’t about the length. It’s about the greed. (More on that later.)

It’s been fittingly suggested that, just as there’s the Extended Director’s version of LOTR, there ought to be an Abbreviated Viewers’ version of Hobbit. Break me off a piece of that.

As penance for being duped into seeing all those Hobbit installments, I decided to re-read the book. That would not only atone for my sin but give me an idea of how much damage was done to the story.

It goes without saying that the book is terrific. In no way did it require being pumped up with massive amounts of gratuitous battle carnage. Evidently, the producers assumed people were craving more carnage because, let’s face it, there hasn’t been nearly enough war in our world.

Beyond the spectacular tale told by Tolkien and the completely realized world he creates so brilliantly, there are insights into our world that transcend the author’s lifetime. The following passage particularly caught my attention: 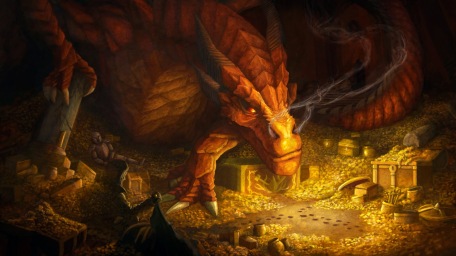 Dragons steal gold and jewels, you know, from men and elves and dwarves, wherever they can find them; and they guard their plunder as long as they live (which is practically forever, unless they are killed), and never enjoy a brass ring of it. Indeed they hardly know a good bit of work from a bad, though they usually have a good notion of the current market value; and they can’t make a thing for themselves, not even mend a little loose scale of their armour.

The most ironic comparison is to the movie producers themselves. It’s all about the gold, artistic integrity be damned. How could they have missed that little parallel?

Closer to the mark, though, are the avaricious denizens of Wall Street whose careers amount to nothing more than collecting other people’s money and hoarding it, Smaug-like, for no particular purpose. They create nothing but profit for themselves. Like those worms of old, these modern day snakes have no use for the cash they collect. They couldn’t spend it all in their lifetimes. (Ask Larry Ellison; he seems to be trying.) The fate of the poor souls barely scraping by outside their luxurious caves, similar to Smaug’s Laketown neighbors, isn’t even on their radar.

It’s inconceivable (does that word mean what I think it means?) to me that Tolkien wasn’t thinking of that class of individuals when he wrote of those who know nothing about what’s good and what’s bad, but “have a good notion of the current market value” of same.

While the filthy rich don’t have the longevity of dragons, their caches of cash do. Their children’s children, some of whom will have never worked a day, are destined to sit on that pile of gold “practically forever”. Over time they grow to be like Thorin Oakenshield, who spent long hours in his treasure of gold “and the lust of it was heavy on him.”

I think Thorin was on the old board of directors of Market Basket.

No need to envy the latter-day Smaugs. Those hoarders are as likely to enjoy a brass ring of their fortune as Smaug did. Without the right heart attitude, our possessions come to possess us. We live in so much fear of losing that which we don’t need or deserve, our lives become consumed by what Tolkien called dragon-sickness, an insatiable lust for gold and possessions. Happiness and joy elude us.

Perhaps the “Desolation of Smaug” depicted in Tolkien’s maps doesn’t so much represent physical barrenness caused by the dragon’s destructive presence as it does the devastation dragon-sickness creates in our own hearts. 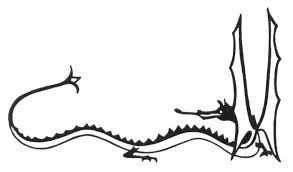