With the advent of new NFL season upon us, it’s time to prepare. The players and coaches prepare, why should we fans not do so? It’s a grueling season. If we slack off now, we might be unable to make it to the end.

Of course, as a native of Massachusetts, my job is easier. I’m rooting for the greatest team in the history of the sport, the New England Patriots. If you favor a different team and hate the Pats, I fully understand. I’d hate them, too, if I were from, say, Philadelphia or Oakland. Or Denver. Or Indy. Or… well, you get it. Sour grapes is an unappetizing but necessary part of the diet of the football fans of those cities, just as it has been for baseball fans from Boston. Until recently. 🙂

Below you will find an important new tool in your appreciation of the sport. Post-game news conferences are about the least enlightening 10 minutes of our lives, filled with platitudes, generalities, and more evasiveness than a Dion Lewis run. Especially if the speaker is the inimitable Bill Belichick. He’s the best coach in the history of the game, but he’s the least forthcoming. Listening to him in a post-game news conference gives one the distinct impression he’d rather have his gums scraped than stand in front of a room full of reporters trying to trip him up. Probably because he would.

To help you pass that painful time, I’ve created the following game: Belichick Bingo. Print the card out and, as you and your family and friends listen to the coach respond to the inane questions reporters throw at him, mark off the phrases you hear. The first to get a vertical, horizontal, or diagonal row of five filled in wins! 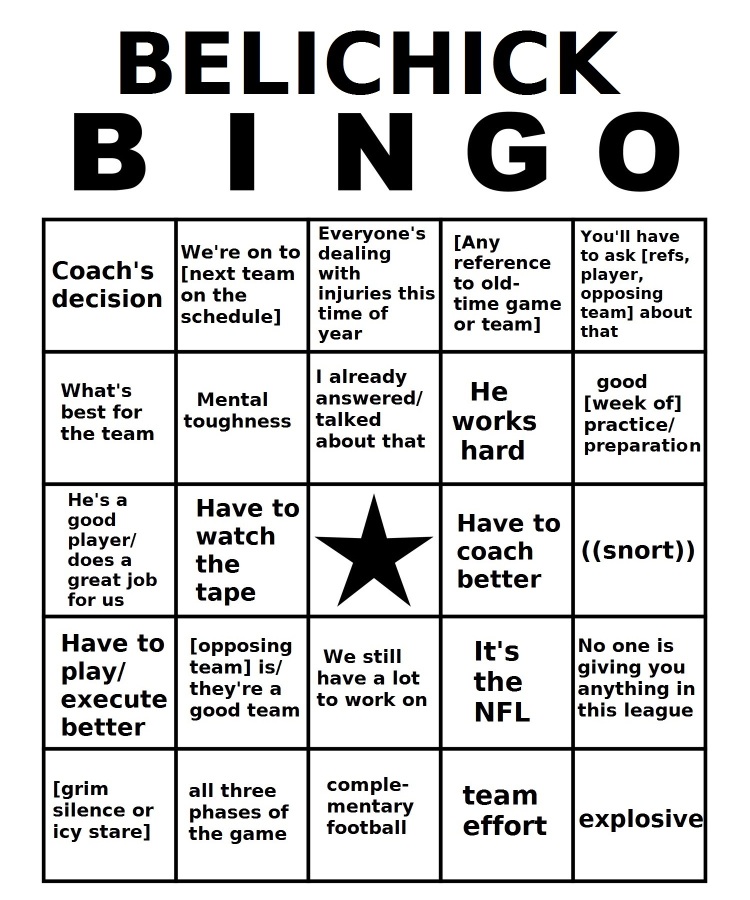 You can even make your own cards with different common phrases from the Belichick post-game lexicon. Here’s a list of more possibilities to get you started:

There you go! The most fun you can have in the NFL without developing chronic traumatic encephalopathy!