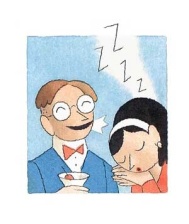 A writer should be a student of conversation. Paying close attention to a variety of verbal exchanges helps us compose quality dialog. A sparkling conversation educates not only writers but all who are involved. A dead conversation simply put its participants to sleep. You wouldn’t put boring lines in your book/movie/story/poem. It’s a good idea to leave them out of real life, too.

Here’s a sampling of topics that cause my head to sag, my shoulders to slump, and my eyes to glaze over.

This next one happened to me recently. It’s probably the reason for the post. At a funeral or other such somber event, it’s almost required that we say to one another, “It’s so great to see you. Too bad it’s under such sad circumstances.”

You say it, I say it. The question is, do I mean it? If it’s that great to see you, why don’t I call you or visit you under better circumstances, such as, say, out of a desire to see you?

I guess that brings me to a meta-observation on bad conversational topics. Maybe anything that is insincere or untrue doesn’t belong in a conversation between people who are anything more than casual acquaintances. Save the subtext for the novels and screenplays.

Which reminds me of a dream I once had…