I’m old enough to remember the 60’s and, unlike some of my contemporaries who find the era’s fashions, language, and music a bit dated, I have no desire to distance myself from that connection. It was a great time. We’d run around in our tie-dyes and bell bottoms waving protest banners with what now seem to be quaint phrases such as: 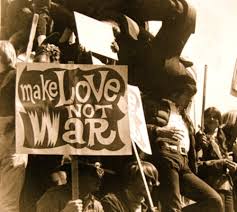 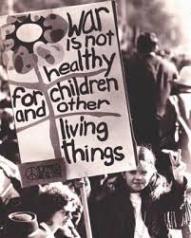 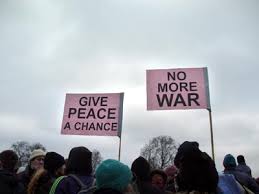 Perhaps the most naive of them all was this one:

This is the one most likely to make people cringe. On the surface, it’s seems so naive, almost childishly optimistic. It sounds so crazy. To quote Steely Dan, “Only a fool would say that.”

But what if it really happened?

For a very short span of time during World War I (the conflict ironically called “the war to end all wars” – talk about naive optimism!) both sides refused to play the game of killing each other for the benefit of absentee generals and politicians.

Over the years, I’d heard stories about the so-called “Christmas Truce” of 1914. This past week I read a thorough history of the events in a book called “Silent Night” by Stanley Weintraub. A movie about the truce was made in 2005. “Joyeux Noel” creates a compelling composite of the actual events by centering on a single group of combatants on the Western Front.

Both book and movie are excellent works, but the truce itself is the amazing tale. Bands of enemies mingled with each other, singing Christmas carols, playing soccer, burying their dead, trading keepsakes, sharing food and drink, and generally getting to know one another. Guns were laid down and differences forgotten. Nearly a million people had already given up their lives for this mindless standoff. Beginning on Christmas Eve that year, a hundred thousand suddenly came to their senses and grasped at the outrageous opportunity to celebrate Christmas with Peace on Earth, if only for a couple of days.

When word of the impromptu truce got back to the powers-that-were-but-no-longer-are, all ensconced in luxurious digs and downing fine food and drink for the holidays, they were incensed. Threats of transfers, court-martials, and even firing squads were brought down on the lowly servicemen who were bogged down in frozen or muddy trenches.

The high ranking officers and politicians thought it insane for the soldiers to drop their weapons and spend Christmas getting to know the enemy who had been painted by each opposing nation as barbaric, evil, less-than-humans who deserved to be and must be eradicated. Those same elites saw nothing crazy about throwing young lives at each other in a futile attempt to move their lines a few yards either way in the pointless and protracted conflict. After all, they were out of harm’s way themselves. Some things never change.

As the groups of enemies fraternized on the few hundred feet of No Man’s Land that separated them, they actually became friends, sometimes making plans to get together after the war. By meeting their foes, British and French troops came to realize that Germans weren’t monsters who crucified children as they had been told. The Germans learned that their foes were just like them, with the same dreams and desires, most with families they missed.

Some people objected. One member of the German army who was alarmed by the actions of the soldiers said:

Such things should not happen in wartime. Have you Germans no sense of honor left at all?

If you find this man’s opinion resonates with yours, be aware that his name was Cpl. Adolf Hitler.

In 1914, everyone thought the end of the war was imminent. It ended up dragging on for another four years, causing millions of casualties. Worse yet, it planted the seeds that grew into the next and even greater conflict, World War II. Author Weintraub in his book makes the compelling case that, had the perpetrators of the war followed the lead of its victims toward peace, we might have not only avoided the second Great War, but the Bolshevik Revolution might never have occurred, thus eliminating more conflict from the world in ensuing years.

Today, armed conflicts seem to be ubiquitous. Once more, it’s not quite clear what people are fighting about, but it’s usually the same thing: enemies are demonized as evil fundamentalist (or atheist – take your pick) demons who want to take away our precious way of life. If you were to talk to most of those enemies, you’d find, just like those men in the trenches in 1914, that they are human beings like ourselves who only want to live their lives in peace.

In the next war, could we have all the leaders – political, military, and religious – slug it out among themselves while the rank-and-file watch from a safe distance? It would make great reality TV.

The more common motivation for war today is to give the big weapons manufacturers an opportunity to showcase and sell their wares. If a few thousand kids are killed in the process, that’s a price the stockholders of said companies are willing to pay. I’m reminded of the opening scenes of a rare good superhero movie, “Iron Man”, when Tony Stark, between bedding women and sipping champagne, sells a gazillion dollars worth of killing machinery to everyone in sight but misses the downside until he becomes a victim of his own products.

Jesus – He’s the guy that started this whole Christmas thing – says, “Love your enemies.” I’m pretty sure, as the saying goes, killing them isn’t what He meant. Is there a better way to celebrate the day than to refuse to kill the people Jesus said we should love?

That is what would happen if they gave a war and nobody came. Maybe it’s not so childish after all.

(For more reading, here’s a fascinating article from nine years ago.)