[Two events brought about the timing and content of this week’s post. First, I missed last week’s deadline for this blog. This is a Limping in the Light week but the next LITL post will have to slip out a week. Second, someone (a fan?!?) was expressing an opinion about my book, A Slippery Land. She said she wanted to hear the stories behind some of the minor characters in the book. Luckily, I’ve already started one such story, so I present it here. I hope you enjoy this first part of the shoeshine’s story.] 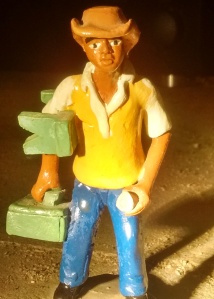 Dawn announced its arrival on the concrete walls long before the shoeshine ever saw the sun. The light bounded between the decrepit structures that surrounded his decrepit house, crept up the alleys, and drew long vectors of light that gradually linked the tumbledown buildings as if his neighborhood were a giant connect-the-dots puzzle.

His eyes opened as slowly as the sun rose. Not even the slightest breeze had infiltrated the room all night. The air he woke up in was the same air in which he’d fallen asleep. The heavy, dust-filled air enveloped him like a vaporous cocoon. His face was drenched with sweat, as it always was, his eyes were bloodshot, and his nose runny. He reached over and picked up a shirt balled up on the floor at the side of his mattress and wiped his face clean. He had another shirt he could wear.

Instinctively, he swung his eyes around the room. It was unchanged from the day before and in fact unchanged from the day he moved in the week after the 2010 earthquake. The day after his home was destroyed by one of the many tremors following the initial shock, he’d found this abandoned tiny concrete box. He’d slept outside it for several days before he felt it was safe from collapse. He found a mattress, dragged it in, and his new house was furnished. After a year, he correctly assumed no one would return to it to claim ownership.

As quickly as his arthritic knees would allow—not quickly by any means—he gathered the tools of his trade along with his will. If he didn’t catch people before church, there would be few customers. Sunday was no day of rest for him. Most everything he needed was still in the mildewed wooden box sitting by the door where he’d left it the day before. He took stock of its contents: A brush, most of its bristles worn down to the wooden base. He’d need a new one soon, but had no idea where it would come from. Two rags, vestiges of shirts he’d picked up here and there, one still stained with the blood of the man he’d ripped it off after the quake. Black polish, a new can he’d bought with last Sunday’s earnings. White polish. He didn’t often use the white polish. White shoes, the style little girls only wore to weddings, became so scuffed up in the rugged streets of Port-au-Prince, shining them was a futile exercise. A couple of badly tarnished gourde coins rattled around at the bottom of the box.

An enormous dump truck, one that towered over most of the dwellings on the street, rumbled by carrying a load of charcoal, carcasses of felled trees that would never be replaced. As the truck shook the ground, his heart raced. He was immediately transported to the moment his life changed forever. The resilience that had carried him this far calmed him by the time the truck passed.

The outlook for breakfast was not good. Perhaps, he thought, a customer would offer him a piece of toast or a sample of Sunday’s squash soup. Hunger had long since ceased to be an impediment to his schedule. It was as much a part of his routine as breathing.

He picked up his little bell, the one that announced his presence with its feeble, tinny sound. He glanced around his home as if there were more to see. All that remained was a trip around the back to relieve himself before he began his rounds. The stain he made on the cement wall didn’t last long in the sun and heat, but the streaks of red drawn by the blood in his urine worried him. He had no idea what it portended but, having never seen it before last month, he assumed it was a bad sign.