[The conclusion of a Haitian shoeshine’s story, begun here and continued in the previous post. Based on a minor character introduced in my book, A Slippery Land.]

The long line of customers at the mission was a mixed blessing. He was running so late, he decided to skip his usual next stop, Toussaint L’Ouverture Airport. No one would miss him there, where mobs swarmed the arriving passengers, grabbing luggage and asking for payment in return, offering rides on tap-taps, or simply begging for American dollars from any blans emerging from the sweltering terminal. Having been at this most of their lives, they knew the blans were probably charity workers already in a giving spirit. The shoeshine usually had to battle those beggars for position. He didn’t hold them a grudge knowing he was only one shoeshine box away from joining them. He didn’t need the reminder.

Proceeding to his next stop, he made sure to cut a wide swath around his old neighborhood of Cité Soleil. Although he’d arrived at an uneasy peace in his own heart regarding his old life there, he knew of others in that slum who would not be inclined to extend the same grace to him. He wasn’t proud of the life he’d led there or the things he’d done, some of which would follow him to his grave. While he was embroiled in those transgressions, he’d rationalized away his misdeeds, telling himself that he only did what he needed to do to survive and get out of the slum. He did get out of the slum, to be sure, but Cité Soleil was never completely out of him.

His next stop was part of his penance. A home had been established for a group of elderly men and women who had somehow survived the ravages of life in Haiti—the storms, the violence, and the final insult: the earthquake. His own actions had prevented some young men from ever having the chance to reach that age. Any of the residents who brought shoes to him would have them shined at no charge.

The old men whose shoes he shined knew that what he did was not free. A price had already been paid. They sensed in him the same turmoil they recognized in themselves. They had been young, too. A few had served as enforcers for the Duvaliers. Some younger residents were former activists in Fanmi Lavalas. On the streets years ago, they might have battled one another to the death. Age had allayed the differences weapons could not. The ideals of youth died long before their own bodies did.

The shoeshine had no political affiliations or inclinations. With the disappearance of his family, he’d become a one-man party with no representation in government he was aware of. He’d seen enough elections to prevent him putting any faith in that process.

The last shoe buffed to a sheen rarely seen on any other object in Haiti, he bade ovwa to the old men.

His last hope for customers was outside the church. A few harried congregants always neglected to shine their shoes. Seeing the gleam of other’s footwear would drive them to the shoeshine in a desperate attempt to prepare their outfits for an appearance before God, even if their souls still harbored pain and guilt. Something could be done about the shoes, at least.

The man wasn’t comfortable around the church. He kept as great a distance from the building as possible without endangering his business. He still believed in God, but his regard for His servants crumbled when his wife fell under the seductive power of the pastor. Other than tending the shoes of the people entering the building, he’d had nothing to do with the church since then.

A cemetery in the Haitian countryside.

A stop at the church was always emotionally draining for him. He needed to rest before he returned home. On the way was a cemetery where he knew he could find quiet. He settled on a stone, hoping it didn’t mark the finally resting place of some poor soul. In his box he found the little treats the kids at the mission house had left him. He took one out and examined it. The colors on the packaging alone mesmerized him. What kind of country had these colorful goods in such quantity that mere children were giving them away? America was a dream. He knew distant relatives who had moved there. He tried to imagine their lives in a place where food was so abundant and opportunity lurked everywhere. How much better his life might be in such an environment, he couldn’t even begin to imagine.

To distract himself from such dreams, which tended to induce more despair than hope, he scanned the area where he sat. Each time he encountered the large, impressive monuments in the cemetery, he was amazed. Ornate wrought iron designs adorned intricately poured concrete structures. Many dwarfed his own home. It made him laugh to himself to think he might have to die to improve his living conditions.

Nothing was new under the Haitian sun. After consuming half the gritty, bland American bar, he wrapped the rest up and stuffed it back into his box. He rose and turned his back on the cemetery, ready to make his way home. In his imagination, his wife and son awaited him. 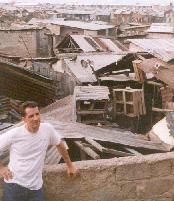 The author in Cité Soleil.

One thought on “The Shoeshine (Part 3)”